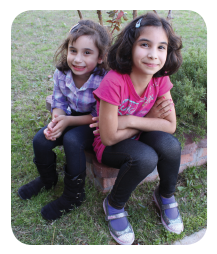 The Said sisters live in a very fun and very loud house. Together, seven boisterous kids live under the same roof. These adorable sisters live with their two parents, five other children, and three other adults in a tree-lined subdivision in Sunnyvale. Diana, age eight, and Sanabel, age five, are very expressive despite their profound hearing loss. The girls have a blast with their in-house playmates but also were experiencing some communication difficulties due to their hereditary hearing loss. At age two years and four months Diana was fitted with cochlear implants. Sanabel also received cochlear implants when she was almost three. Loud environments, like their school and household, sound especially muffled and distorted for them, making it hard for them to separate one sound from another sound. Their Mom had to be close and talk very loudly for the girls to hear her. According to their audiologist and SLP Lucy Liu, “They don’t do well in noisy situations.”

To facilitate learning, their school system outfitted the girls with FM systems so the teacher’s voice would be amplified and they could learn in a traditional classroom environment. When the bell rung for the end of the day, the girls had to the leave the FM systems behind as they were school property. They no longer had the benefits of these much needed FM systems after school and at home. Unfortunately, these high-tech systems were too expensive for their parents to cover for home use. Lauren Blackwell, their SLP, saw these two motivated sisters and their loving family as great candidates for Chari-T2000 assistance. The family provided 10% of the cost and Chari-T2000 funded two FM systems for the girls. The Said sisters received one transmitter and two receiver boots in December. Lucy Liu started the girls off with just one transmitter so it wouldn’t be too complicated for the family to adjust to at home. Once the girls initially tried out their new receivers, their Mom had to learn she no longer had to yell to communicate with her daughters. To test the receivers on the first day, Lucy asked the mom to go in another room and ask a question over the transmitter while the sisters stayed in the other room. Mom asked the question in her normal tone. Loudly she asked, “What color is your shirt?” The quick response from Diana was, “too loud!” Meaning, the FM system was working just fine! Now their mom is getting used to talking to them in her normal voice. Though the girls have only been outfitted with the system at home for a short while they are already showing vast improvement in their speech and communication. Just last week Lucy brought in the second transmitter for other family members to start using with the young girls. Thank you all for supporting Chari-T2000 and providing these much needed assistive devices to this deserving family. Thanks to you, both girls can now hear better at home and participate with ease in family activities.