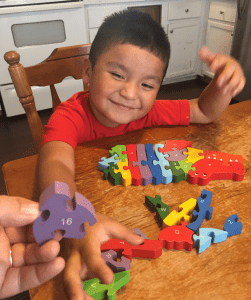 Gael was born on December 11, 2014 at 38 weeks with no complications. Just like a typically developing child, he would respond to his name, pay attention to his parents and others, coo, babble, pose for pictures, play with others, imitate movements (dancing and marching), react appropriately when told not to do something, and turn around and smile when his name was called. However, once Gael turned 2 years old, he was extremely lost. Lost in his own world, displaying no eye contact and did not respond to his name nor anything.

Gael was diagnosed with severe Autism, presenting the following: dependent on parents; no eye contact; assumed to be in his own world; ignored others in room; tactile defensiveness (did not like to be touched nor hug); disconnected from everything; did not recognize routine; flip cars and would spin them; unable to imitate others; no humor (did not laugh); no emotion; no facial expression; no affection towards others and animals; did not respond to name; the only way to get his attention was by singing; played by himself; ran away from parents when outside (park/home); no interest in staying/playing at park (would run to the street); did not listen and obey; unable able to wait for turn; did not ask for his wants and needs; aggressive towards others (pushing/pinching other’s hand when attempting to help him complete an activity); no awareness of home and environment; unable to maintain tailor sitting (always slouching or leaning on supported surface);unable to go up the steps. 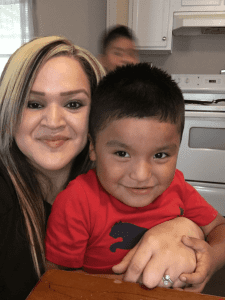 On February 6, 2018, Gael Morales began to receive Occupational Therapy, twice a week, with Ana Ponce, COTA, implementing The Son-Rise Program techniques with great emphasis on eye contact. (The Son-Rise Program allows you to get into their world, so they can teach you how to teach them how to get into our world. www.autismtreatmentcenter.org). After 2 months of Occupational Therapy, Gael made incredible progress and was a completely different child, displaying the following: liked to be independent; sustained eye contact with others; now present on our world; aware of others, home, and environment; loved hugs; connected with others; recognized his routine; was no longer flipping and spinning cars (playing appropriately with cars); imitated more words and others actions; displayed humor, emotion, and facial expressions; showed affection towards others and animals; responsed to his name; was attentive towards others and safer in public; was excited to play in the park and see other kids playing; and improved with overall listening/obeying/expressing his needs/and playing appropriately! He was not aggressive towards others and also improved with going up steps independently and maintaining tailor sitting (I applied kinesio tape on Gael’s posterior chain muscles to increase muscle memory.).

Currently, Gael receives OT and ST with Therapy 2000 and continues to progress in different areas of development with increase interest and motivation in letters and numbers. I can truly say that Gael is extremely smart, as he can read Spanish and English and knows how to spell & write his first & last name (still working on letter sizing and spacing). Gael is one of my first patients to ever make this remarkable progress in such a short amount of time and has so much potential to do so much more!