Friday, March 21st, is World Down Syndrome Day (WDSD). The date was chosen for the significance of the genetic disorder, trisomy of the 21st chromosome. One in every 691 American babies are born with Down syndrome making it the most common genetic disorder. The date is celebrated to bring awareness and promote the fact that people living with Down syndrome can live happy, healthy and fulfilling lives.

One of our THERAPY 2000 parents has been a constant activist for the Down syndrome community at large and her son, Tim. This year the family put together one of the largest teams for North Texas Buddy Walk, raising $4,000 to support the cause. Theresa knows the importance of raising awareness that children with Down syndrome can lead rich, fulfilling and happy lives.

Theresa and Tim have maintained a relationship with Kathy Gamble, Tim’s former THERAPY 2000 PTA. Kathy worked with Tim from age 15 months until he was five and a half years old. This team of three has been out in the community advocating for Tim and other kids like him. One thing the threesome has done for the last three years is participate as guest speakers for a Texas Womens University Child Development class. Kathy and Tim share the benefits of physical therapy through live demonstrations of exercises they would do together in normal home therapy sessions, bringing the text book to life. The response from the students is always incredible. After Kathy and Tim demonstrate techniques for the class, Theresa talks to the students about Tim’s life. This year they shared an article Theresa wrote on having a child with Down syndrome called Expect More. The article discusses the importance of keeping high expectations for all kids and how it affects who they become. It is important to expect more from every child, including one with Down syndrome. Higher goals mean that you believe in them and they can believe in themselves. Kathy, Tim’s former PT, shared these words about live classroom experience, “It is important to educate students about things like putting the child first, setting high expectations, starting intervention early to help children live up to their highest ability and level of independence, and putting a face on the value of a life. I’m always so moved by Theresa’s impassioned speech on valuing life rather than passing up a blessing out of fear of the unknown, or labeling a child with special needs a burden.”

In honor of World Down syndrome day, THERAPY 2000 salutes Tim, his family, and our own THERAPY 2000 PTA, Kathy Gamble, on a job well done! Thanks for all your hard work on advocating for kids with Down syndrome, Below is Theresa’s article on expecting more and a poem she gave the Tim’s school teachers as a thank you for all their hard work.

We now have one of the most social and outgoing six year old boys with Down syndrome that his pediatrician knows. Yet, after I replaced Tim’s first speech therapist, (who was in our home twice a week for over two years, from his being one to three and a half) I learned that she had decided he probably never would speak since he wasn’t speaking intelligibly by the age of three. We got a therapist who was willing to try methods I had learned about in DSPNT trainings and within four months Tim’s vocabulary had doubled. We have to expect more! 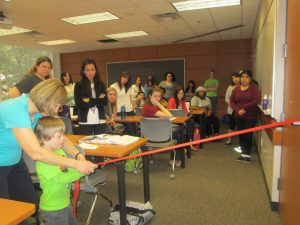 Both of our boys are seen by the same fantastic dentist. Tim’s older brother, Thomas, has been getting x-rays of his teeth since his first visit to this dentist at age four. However the technicians never offered to try to x-ray Tim’s teeth. Finally last spring when we went for our six-month checkup I asked them when they thought they would start trying to x-ray Tim’s teeth. (He was almost six.) They said they could try that day. We did, and it didn’t go too well. But as I figured, if we never started, we would never finish. If we didn’t try to get x-rays we never would. This past fall when we returned to the dentist I had a discussion with Tim before we left the house. I told him that if he sat still and let the technicians clean and x-ray his teeth and let the dentist look at them well, then we could stop at McDonald’s for lunch on the way home. (We “never” stop anywhere.) It worked like a charm!!! I have never been so happy to eat at McDonald’s in all my life. We have to expect more!!!

I am constantly having to ask myself, “What am I expecting of my children?” “How are my expectations limiting them?” “What are others expecting of my kids?” “Are the expectations of those individuals the ones I want to shape my child?” We as parents are called to govern and shepherd and nurture our children and help them become all they were created to be. I hope you will join me in expecting more!


These tasty treats come long overdue,
But they are given to say a big THANK YOU!!!
Whether you are a teacher or on the school’s support staff
Or just someone who likes to make Tim laugh
We want you to know that we appreciate you!!!!!
We want you to be blessed and avoid the flu,
So this year we are giving you some veggies too.
In 2013 our little boy turned six.
We’re sure you’ve noticed he’s learned a few tricks.
He knows that he is pretty darn cute
And if you are not careful he will act like a toot.
We appreciate each of you who expect more of him.
Please don’t let him get away with anything in the halls, grounds, classes or gym!
Hold him to a high standard! Expect him to compete!
Don’t ever be fooled by his tiny hands and feet.
We are grooming a champion, a future leader.
Who knows, maybe someday he may be a teacher!
Maybe not one in the typical sense,
But he will become a man of great influence.
So thanks for all of the things you do to keep Tim safe, happy and learning.
As we reach this midpoint, where the school year is turning,
We want you to know YOU ARE APPRECIATED!!!
THANK YOU!!!!