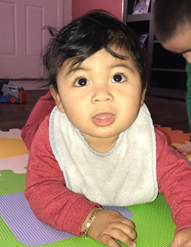 Joshua was a 5-month old with the diagnosis of congenital muscular torticollis (CMT) when PT began in October 2019. He demonstrated interest in primarily looking to the left and playing with left hand. He was unable to maintain upright sitting position due to head tilt and rotation resulting in consistent loss of balance to the right side and no protective reactions. More importantly, he demonstrated almost zero engagement with his right side, including his right hand with no crossing midline or playing/grasping with both hands together. His neck was very tight on the right side, which caused his head to rotate to the left, and he was showing early signs of head flattening. This asymmetry was leading to abnormal movement patterns, resulting in a global delay of milestones.

He was unable to roll symmetrically to both sides or prop symmetrically on his tummy. His mom was convinced he was “stuck” and unable to look around to move his head to the right, which was honestly a pretty good observation.

Joshua was demonstrating skills just below the 10th percentile for his age of 5 months.

Without skilled PT intervention, decreased cervical ROM and strength along with right cervical head tilt can lead to scoliosis, more advanced right side neglect, cervical spine joint contracture, facial and cranial asymmetry, asymmetric use of arms, decreased visual learning to right side, and decline in gross motor skill development. The Section on Pediatrics of the American Physical Therapy Association 2018 Clinical Practice Guidelines for the management of congenital muscular torticollis recommends “Early identification and treatment of congenital muscular torticollis (CMT) is critical for early correction, early identification of secondary or concomitant impairments, and prevention of future complications. Early referral to physical therapy translates to earlier intervention and prevention of secondary sequelae, and, by reducing treatment duration and avoiding additional or more invasive interventions, is cost-effective.”

The primary tactic taken during PT visits was parent education. Due to his age, it was determined 1 visit per week with a lot of written/visual handouts and photos provided to mom would be an appropriate frequency. Early teaching focused on positioning at sleep time as well as ways for mom to support him in sitting to allow him to become more engaged and provide his own movement to stretch and look around his entire environment. During PT visits, the therapist also discussed car seat positioning, “container use” in moderation, as well as encouraged having him face different directions throughout the day to look towards the people, TV, out the window, etc to prevent continued resting positioning rotating to the left.

His mother was phenomenal! She texted pictures to his PT during the week to ask questions to make sure she was placing him in the right positions, and to get affirmation or more ideas from the PT to advance him towards new skills. During PT visits, Joshua advanced quickly as a result of being an extremely happy baby, as well as responding well to all the PT handling, stretching, and positioning because they were the exact same things is mother was doing by following the PT HEP throughout their daily activities.

In only 12 visits, Joshua’s skills increased to between the 50th and 75th percentiles! He was able to roll symmetrically, attain hands and knees on his own, as well as push into and out of sitting independently. He no longer demonstrated asymmetry or tightness with his neck movements at all. Both mom and PT were extremely pleased with is progress and agreed it was already time for discharge! At the beginning of the new year, mom even texted the PT to tell her he is now creeping all over the place and pulling to stand at everything!