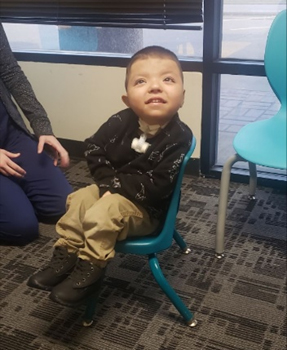 Alberto is a delightful four-year-old that loves music and playing outdoors. During the initial speech and language evaluation he primarily communicated with hand gestures and one-word utterances. He typically communicated his wants/needs by crying and turning away when he did not get what he wanted. Alberto’s mother wanted him to have a primary mode of communication to better communicate his basic wants and needs.

The main goal for speech services was to increase communication and participation. The speech-language pathologist and Alberto worked on making choices using a combination of gestures/signs. Therapy started off with two preferred toys in sight and Alberto had to point or reach towards the toy he wanted. Next Alberto progressed to using pictures of his preferred toys to introduce the concept of cause/effect for AAC devices. The SLP worked on trialing different (low/mid/high tech) AAC devices while also working on joint attention during structured play activities. Alberto’s mother also started to implement mid tech AAC buttons with core words such as yes/no during their home exercise program activities.

Alberto’s communication has greatly improved since the beginning of speech therapy. He has improved his ability to make choices by pointing/reaching. Alberto independently points to pictures when requesting preferred toys/objects. Alberto’s mother reports Alberto uses his buttons at home as well as learning the concept of cause and effect when he says yes/no. Alberto greets familiar individuals independently (waves, smiles, claps) and shows excitement. We are excited to see what Alberto will accomplish in the future with continued support!