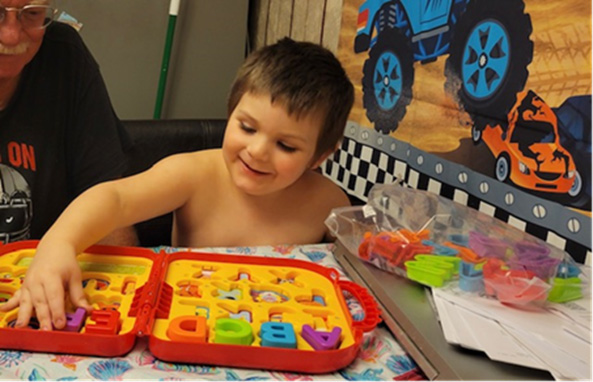 When Camden started therapy, he was three and a half; this July, he turned five! His favorite activities are bubbles, puzzles, throwing balls, racing cars, building blocks, and pretend play with his kitchen and food. He also loves swimming during the summer!

At the time of the initial referral, Camden was minimally verbal, requesting by pointing to items or pulling his mom’s hand to help him, and frequently got frustrated when others did not understand his requests. He was rigid in his play behaviors and had difficulty attending and participating in therapy tasks for longer than a few minutes. He did not imitate play, verbalizations, or body movements.

The speech therapist worked hard to increase his play skills and participation in activities with others and introduced sign language. She attempted to use songs with movement to increase imitation as well as motivating activities like bubbles to increase the use of signs. His mother worked hard with him weekly and participated in each session. His play skills improved over time, and after a few months, he was sitting and playing with the SLP and his mother for an entire session.

During treatment, Camden wasn’t progressing with signs and imitations of movements. Therefore a low-tech core board was introduced to see if Augmentative Alternative Communication or AAC was an option. With the same motivating activities, like bubbles, he started requesting “more” with the core board after a few modeling sessions. That was a huge milestone and exciting to see him request “more” after many weeks of trying to get him to request “more” with sign.

The SLP continued to add more core words weekly as they waited for his trial device to come in. On the core board, Camden could request help, open, more, and go, all done independently. When he got his trial device, he took a few weeks to explore the device and selected off-topic words for most of the sessions, but his mother and speech therapist continued to model his core words to help him understand the cause/effect of the device.

With continued modeling and consistent practice during sessions and throughout the week with his mother, he continued to make progress. After four months with his device, he can now make many requests using one-to-four-word phrases independently. For example, he communicates what he wants to eat, what he wants to play with, when he is done with an activity, says bye, and expresses when he needs to rest, with minimal assistance.

The device has also helped him understand more vocabulary like body parts, clothing, foods, and toys. His mother doesn’t have to guess his wants and needs anymore and can give her son directions to help around the house. With his mother’s participation in the home program and continued practice during sessions, his session frequency will reduce and move towards a maintenance frequency as he becomes more independent.

Don’t hesitate to reach out to us to set up an evaluation for your child. Our highly trained and experienced therapists specialize in several comprehensive therapy services, such as pediatric speech and language therapy, pediatric physical therapy, and pediatric occupational therapy. You are not alone, and we are here to help!