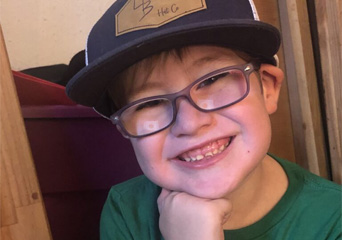 When Grayson was first evaluated for speech therapy at five years old, his mother could understand only about half of his speech, Many times, Grayson couldn’t be understood at all, and he would withdraw and walk away. 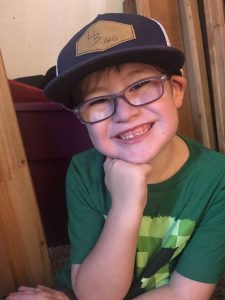 Summer 2020 was very difficult for Grayson and his mother. Grayson’s mother was eight months pregnant when they experienced a tragic housefire during the height of the Covid-19 pandemic. He stayed with his grandmother in West Texas for several weeks while his mother gave birth to his new sister and settled into a new home. Because of teletherapy, Grayson was able to begin speech therapy as soon as the insurance authorization was received. Grayson’s mother and family have been extremely supportive throughout his care.

Currently in his third episode, Grayson has perfect attendance and has been determined and dedicated to improving his speech! With each visit (mostly via telehealth until the Summer 2021), he and his mother practiced target words, and he began meeting goals. Along with handouts including target words to practice, Grayson had one or two specific words he practiced until they were mastered. Usually, the words involved Minecraft or another video game, since he LOVES playing video games!

During his most recently re-evaluation in June 2021, his scores on standardized testing had improved by 68%, and his therapist believes he soon will graduate! Grayson is smart, clever and has a wonderful sense of humor! Now he can share his incredible personality with anyone who is lucky enough to meet him!