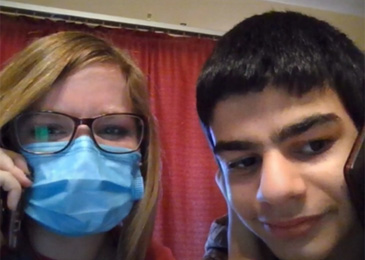 Judah is a 19-year-old man who was adopted from a Bulgarian orphanage by his when he was 11. Spending most of his early years in a crib, he had little social or cognitive stimulation. As a result, Judah has a history of reactive attachment disorder and other psychological concerns, including Autistic Disorder with Catatonia (A neuropsychiatric disorder which affects behavioral and motor functions).

According to Judah’s adoptive mother, he did not thrive in a traditional home environment, so it was in his best interest to be placed in a group home for men with cognitive delay.

Shortly after arriving at the group home in 2019, Abbie, an Occupational Therapist with THERAPY 2000, evaluated Judah. The group home reported that Judah would not initiate his activities of daily living (ADLs) such as grooming, dressing, or toileting, and he demonstrated poor awareness and coordination. For example, Judah would need verbal cues to go to the restroom and leave the bathroom when toileting is completed. He could not complete instrumental activities of daily living (IADL’s) such as laundry, schoolwork or participating in mealtimes. Additionally, Judah had atypical attachment and social awareness and could not verbalize or demonstrate “play” activities or preferred tasks.

The primary concern was Judah’s inability to complete ADLs and participate safely in the community. Abbie worked with Judah to increase his awareness both inside the home (i.e., identifying weather-appropriate clothing and grooming needs) and outside the home (writing his first and last name, identifying his phone number and address).

Next, Abbie targeted functional play and IADL’s such as drawing, playing board games, completing chores, and making small meals that didn’t require stove use.

Judah has made significant functional progress in his group home environment since starting Occupational Therapy. He is now functionally independent with all ADLs, including dressing, grooming, toileting, and showering. Judah is also functionally independent with chores around the group home, such as completing his laundry and making meals that do not require a stove. He can even order food or buy things in the community with assistance for handling money. His favorite things to do are draw and play video games. Judah enjoys going to school and riding the bus more than anything else.

Judah will soon be discharged based on being functionally independent in his group home environment, and his caregiver and teachers are amazed by his progress. They believe Occupational Therapy has had the most significant impact on developing functional ADLs and IADLs independence, as well as his play and social interaction with peers. You can frequently find Judah sitting on the couch with other members of the group home watching TV or following another group home member outside to sit in the sun.

If a child you love could benefit from therapy, click here to make a referral.